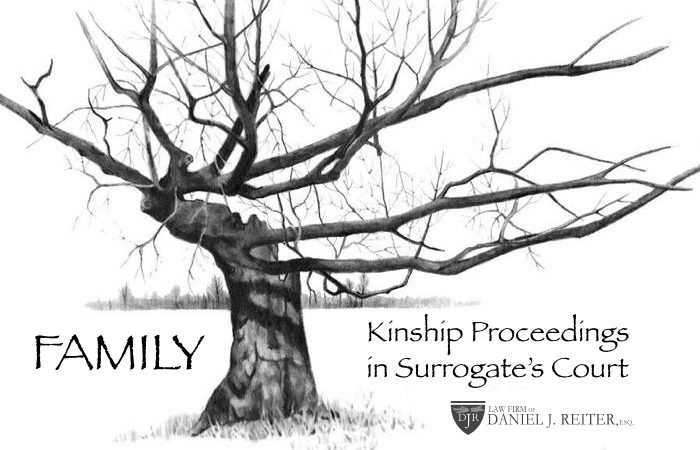 In a Kinship Proceeding, the New York Surrogate’s Court seeks to determine who is entitled to inherit from the estate of a deceased person who did not have a Will. The Surrogate’s Court is the court in New York State which handles most matters regarding death. When someone dies without a Will they are said to die “intestate”. The person who died is formally known as the “decedent”.

Therefore, the Court holds a Kinship Hearing to determine the rightful heirs of the decedent’s estate (in legal parlance, the “distributees”).

When are Kinship Proceedings Required?

Kinship Proceedings are required in a variety of circumstances, for example:

How Does a Kinship Proceeding Work?

As noted, the people claiming to be distributees (those entitled to inherit) are called “alleged heirs” or “claimants”. The legal burden of proof is on the alleged heirs. They must prove by a preponderance of the evidence that they are the actual heirs of the decedent’s estate.

A Kinship Proceeding will result in a Kinship Hearing, which is best described as a small trial. For the most part, the same rules of evidence and procedure that are followed during a trial in New York are followed in a Kinship Hearing. However, a Kinship Hearing is generally much more informal than a trial, and the parties sometimes stipulate to have the case held before an Attorney Referee, instead of the Judge. At the same time, the Judge may also “refer” the case to a Referee on its own initiative.

In the months leading up to the Kinship Hearing, the claimants will begin collecting proof and evidence of their blood relationship to the decedent. Experienced attorneys know that hiring a professional genealogist to perform research, investigate, write a report, and testify at the Hearing, is often the surest way to success. With the help of the genealogist, the attorney for the claimants can prepare a Family Tree to help guide the Court and parties through the Hearing with clarity and ease.

The claimants themselves may already be in possession of the decedent’s property or other evidence that can buttress their case. For example, the claimants may be in possession of, or have access to, birth certificates, death certificates, books, diaries, letters, photos, and other materials the decedent owned which evidence a familial relationship. The complex rules of evidence govern the admissibility of these items into evidence at the Hearing. The claimants may also be aware of “disinterested witnesses”. A disinterested witness is a person who knew the decedent’s family well, but is not entitled to inherit, such as a close friend or long-time neighbor. The disinterested witness’s testimony can buttress the claimants’ case. Documentary evidence coupled with testimony of witnesses is an essential element of success at a Kinship Hearing.

Who are the Parties to a Kinship Proceeding?

The parties to any Kinship Proceeding include:

Does a Judge Try the Case?

A Surrogate Judge can certainly try a Kinship Hearing, but the Referee generally oversees the Hearing and reports its findings of fact and conclusions of law to the Judge. The Referee generally reports, in writing, to the Judge, but the parties may agree to waive the requirement of a written report. This is usually done by oral stipulation on the record

What Happens After the Hearing?

After the Hearing concludes, the Referee issues its report. The Referee is said to “hear and report”, but the Referee’s report is not final and binding. Although the Surrogate Judge usually confirms the report (agrees with its findings), it does have complete discretion to reject or accept it (in whole or in part), to modify the report, or to direct a new Hearing.

The Guardian ad Litem will also issue its report. The report is almost always in writing, but can be made orally in open Court with consent of the Surrogate Judge. As a matter of course, the Guardian ad Litem can take quite some time preparing a report, especially if the proceeding was particularly complex.

The Judge will make a final decision based on the Referee’s report and Guardian ad Litem’s report.

What happens after the Judge renders its decision depends on the findings. For example, if the alleged heirs A and B claim they are the only rightful heirs, and their case is successful, the funds will be distributed in equal shares (i.e., 50%) to each A and B. If the ruling is adverse to A and B, they do not have a right to appeal, but they are allowed to make a motion to deny the findings in the report.

How are Kinship Hearings Won?

I can never guarantee success in a Kinship Proceeding – no attorney can. But there are common elements that make for a successful Hearing.

How Do I Become (or Know) if I am a Claimant or Alleged Heir?

People find out they are an alleged heir or claimant in a variety of ways:

How Do I Know if I am Entitled to Inherit?

This depends. The statute is complex. The short answer is that the closest living ancestors of the decedent, as determined by statute, inherit. But this is only something that I can determine with precision after a conference with prospective clients.

If you or a client of yours believes he or she is a rightful heir to a decedent’s estate, you are encouraged to contact me at 646-820-4011 or djr@djrattorney.com. I handle all matters regarding Kinship Hearings and Surrogate’s Court proceedings in New York State.

Who Can Object to a Will?

If you've been left out of a will, you may have rights. Certain people are…